September 3, 2019
by BC Parks Foundation in Wildlife Forever , Protecting Parks 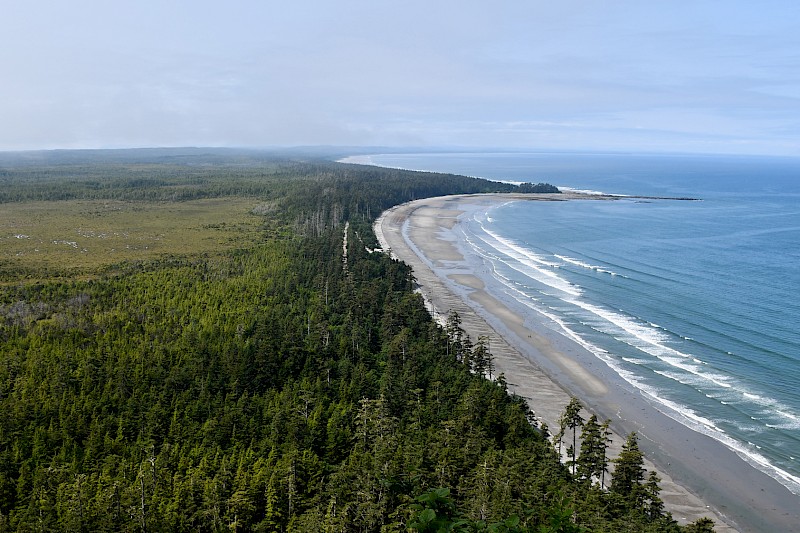 Looking westward over Naikoon and North Beach from Tow Hill

As I stood in the middle of a wetland clearing, surrounded by Sitka spruce trees dripping with moss and encrusted with lichen and fungi, I was overwhelmed by the incredible natural diversity of Haida Gwaii’s northern coastline. I was only just out of reach from the damp sea mist that had rolled in from Dixon Entrance off the shores of Naikoon Provincial Park, yet already I had hiked through multiple changes in landscape, each with its own fascinating assemblage of species.

I was spending the afternoon and evening exploring Tow Hill Ecological Reserve (ER) — one of two ecological reserves[1] attached to Naikoon Provincial Park — as part of a multi-day trip to take photos of the region’s plant, animal and fungi species for a citizen science[2] initiative called the BC Parks iNaturalist Project, which was developed through a partnership between BC Parks, the University of Victoria, Simon Fraser University and the BC Parks Foundation. This project encourages British Columbians and visitors to use iNaturalist, a powerful and trusted mobile phone app and website, when visiting parks and protected areas. By joining this project park visitors learn about nature while also helping BC Parks and researchers develop a deeper understanding of what our parks are protecting. 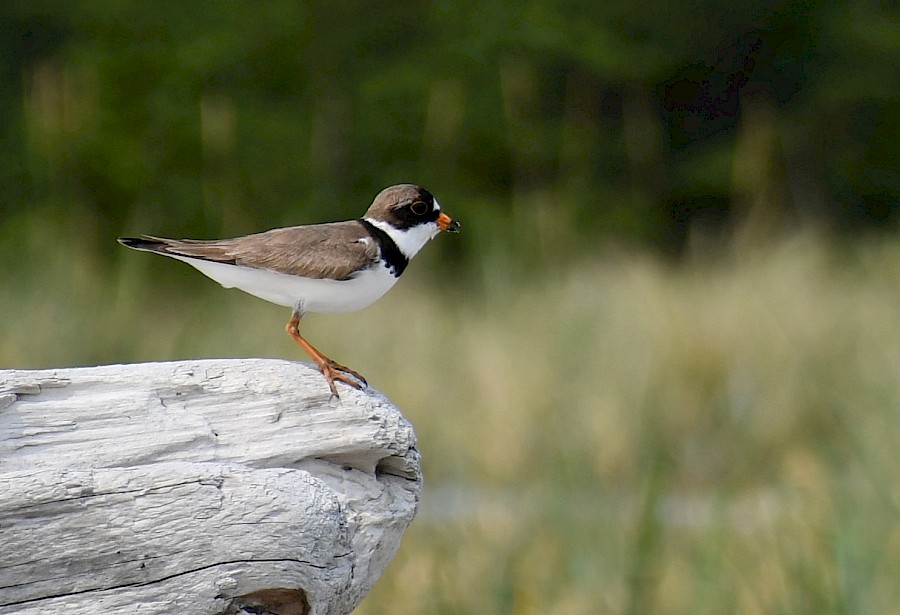 A semipalmated plover (Charadrius semipalmatus) on the shores of Naikoon.

iNaturalist and the BC Parks Big Summer

iNaturalist is used worldwide to crowdsource photo observations of species: users upload their photos of plants, animals and other organisms to the website or app and the system’s image recognition software helps to provide an identification while the iNaturalist community of citizen scientists confirms identifications and corrects errors. While iNaturalist is by no means new, this push to collect and further encourage citizen science observations in B.C.'s parks and protected areas is a new initiative this year, with hopefully many more years to come.

A special field team launched the BC Parks iNaturalist Project this summer by exploring as many parks and protected areas as they could get to throughout the province, from Mount Tzuhalem Ecological Reserve on southern Vancouver Island to Tā Ch’ilā Provincial Park (Boya Lake) in the Stikine and so many amazing places in between. I was lucky enough to tag along with this crew as they documented the biodiversity of Haida Gwaii’s northeast corner. Over the span of five days we visited the shoreline and dunes of Misty Meadows at Naikoon’s southernmost edge, the shores of Tlall Heritage Site/Conservancy just to the south, Rose Spit Ecological Reserve stretching out into the ocean at the northeast tip of Haida Gwaii, Tow Hill looming over the northern coastline, and North Beach and the many wetlands dotting the landscape just inland, including Tow Hill Ecological Reserve. 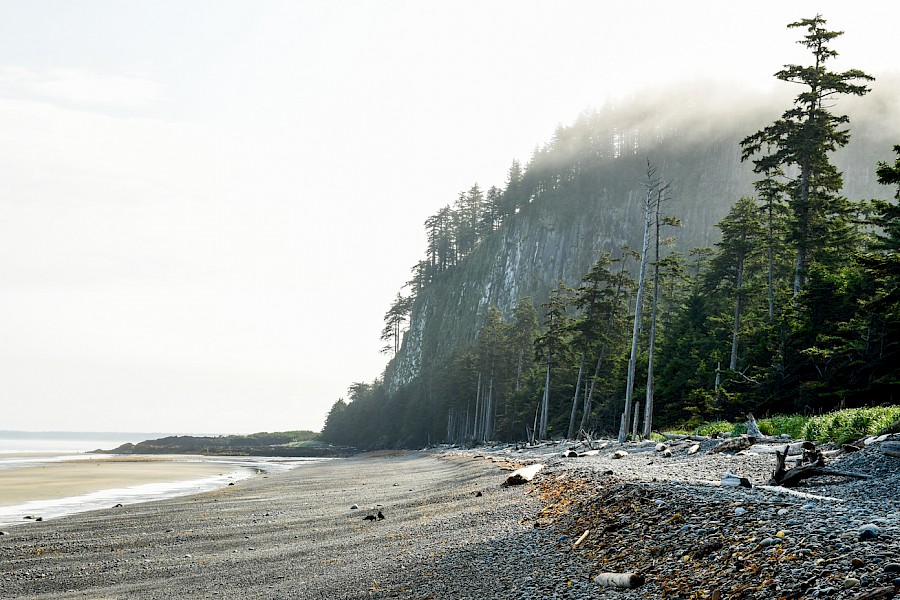 An abundance of biodiversity

These beautiful places are jam-packed with a huge diversity of habitats and life. After exploring an expansive shoreline of hard packed sand strewn with seaweed and shells at the coastal edge of Tow Hill ER, I headed inland over the open sand dunes hiding numerous rare plants, through a rolling series of ancient dunes increasingly grown over with a tangle of deciduous and small conifer trees festooned with ribbons of different mosses, until suddenly the canopy lifted and I emerged into an old growth forest that felt like a quintessential ad for Haida Gwaii. Tall Sitka spruce and western hemlocks covered in pillowy moss mats dominated my line of sight and bright green patches of salal and grasses broke up the thick moss carpeting, while here and there delicate flowers and lichens dotted the ground. 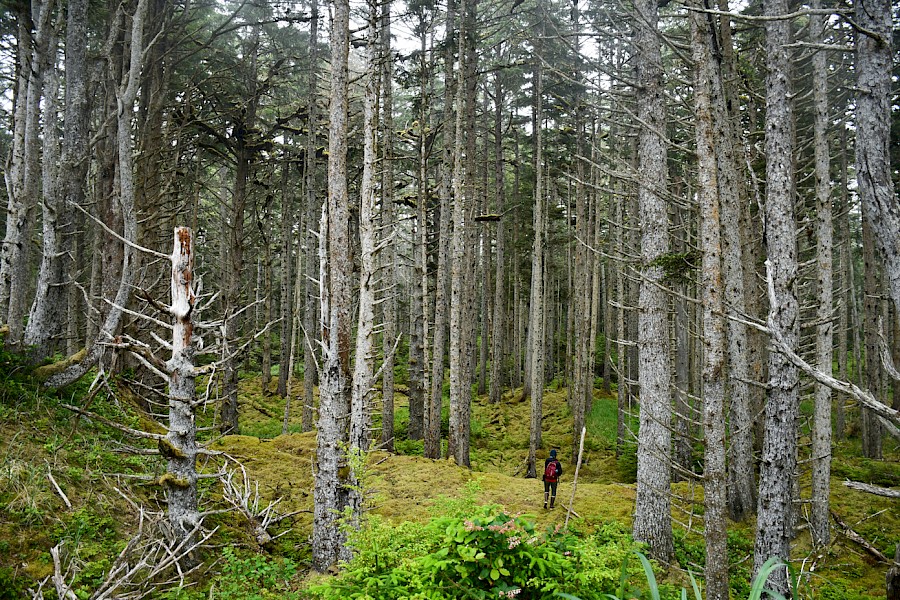 A bit further inland — still only about half a kilometre from the beach — the landscape transitioned once again, finally opening up into that beautiful wetland clearing. Fallen trees became a nursery for other plants and fungi, while close to the ground bright wetland wildflowers poked out of the sedges and rushes and red-legged frogs[3] camouflaged under decomposing logs. Others from our group ventured further and found one of the large open bogs that make up a lot of the interior of Tow Hill ER and Naikoon. These bogs are dominated by cushions of peat moss and many stunted shore pine trees; in spring and summer the bog is dotted with numerous species of pink, yellow and white wildflowers. 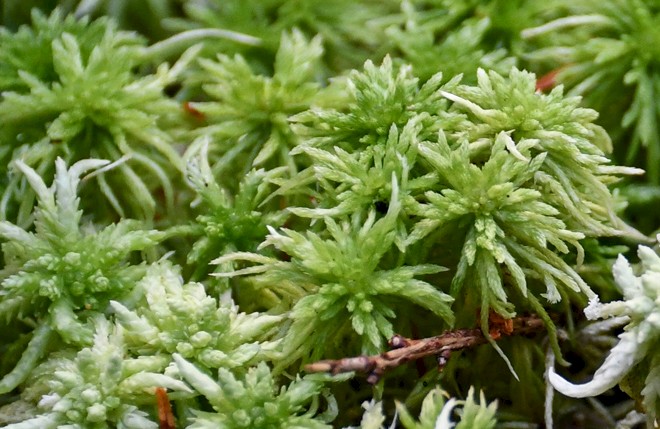 Catching all the species

Our goal here and during the rest of our explorations was to take as many photos as we could of the species we saw along the way — given the level of diversity we encountered in Tow Hill ER it’s no wonder we moved less than a kilometer inland in the span of a few hours! Each habitat transition we went through brought a host of new species to document and opportunities to marvel at the small details that distinguish species, such as the different colours and textures of the shelf fungi that jut out from tree trunks, the tiny flowers of the heartleaf twayblade orchid and the many shapes and shades of the leaf-like seaweed blades that wash ashore: golden yellow giant kelp and sea sacs, bright green sea lettuce and maroon nori. While we could not come close to documenting every species living in that small corner of Haida Gwaii, within just a few days we managed to photograph more than 100 species in Tow Hill ER, over 300 in Naikoon and at least 60 in Rose Spit ER. 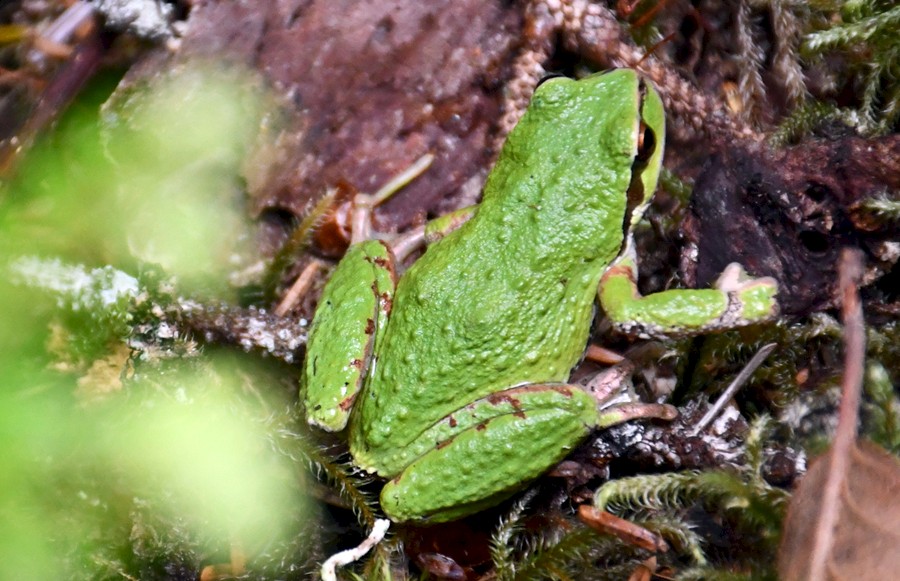 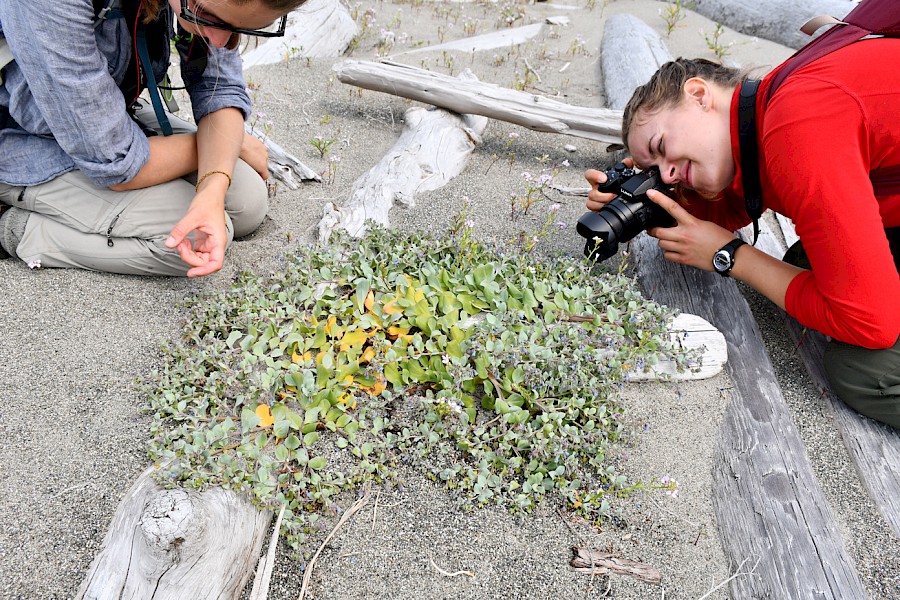 We had a number of awe-inspiring, fascinating, surprising and exciting finds during the brief time we spent exploring Naikoon and its adjacent ecological reserves: 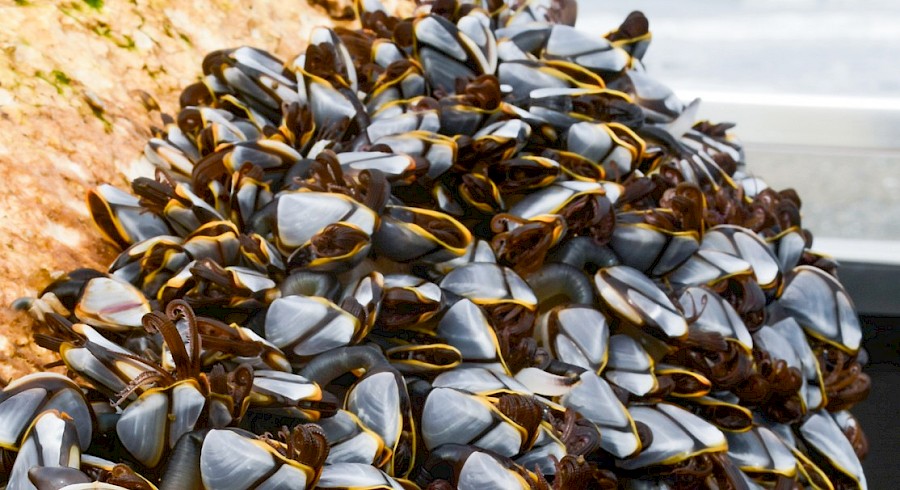 Looking at the world through iNaturalist's eyes

Exploring our parks and protected areas with iNaturalist in mind can provide a whole new perspective on the natural world around you, opening your eyes to things you may not have noticed: how the trunks of both living and fallen trees host a multitude of different organisms; the way life packs so tightly into the narrow band of the intertidal zone along the shore line and yet each species finds its niche in that ever-changing environment; the branching pattern or leaf shape that make one moss species different from the other; the delicate wildflowers that peek out from the cushiony moss mats in the forest or the peat moss in the bog.

Next time you are out exploring one of our many provincial parks and protected areas (you have over a thousand to choose from) keep the iNaturalist perspective in mind and take a closer look at the rocks, logs, trees and skies around you to see how many species you can spot! 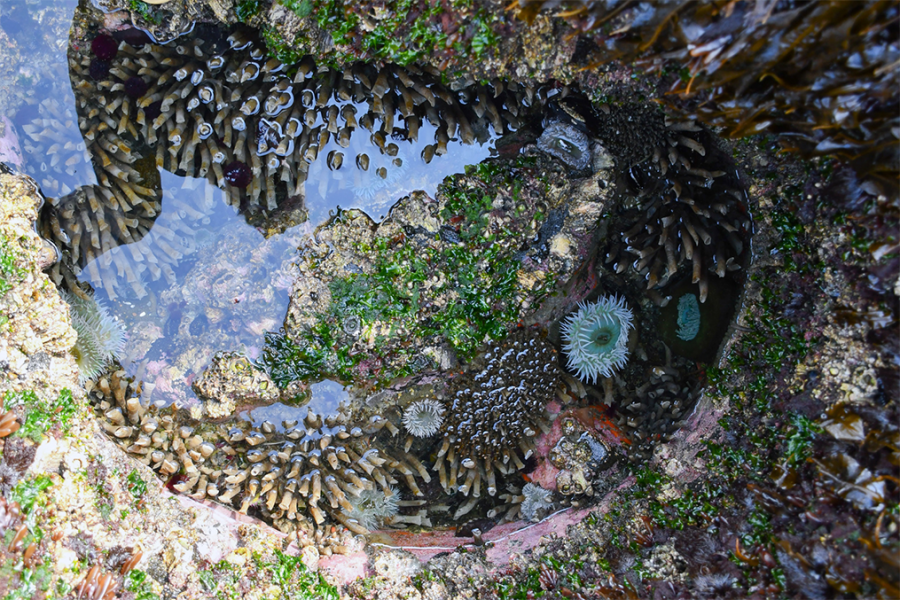 Intertidal life packed tightly into a tidepool in front of Tow Hill.

Want to join the BC Parks iNaturalist Project? First, visit the BC Parks Foundation’s iNaturalist Project page to learn more and download the project How-To Guide. There you will also find our Observation Calendar to learn about the best times to observe different species around the province and our PARKS Bingo Cards for different regions and species groups. Second, visit the project page on iNaturalist to join the project, see how your favourite parks stack up in observation numbers and stay up-to-date with the project’s news! 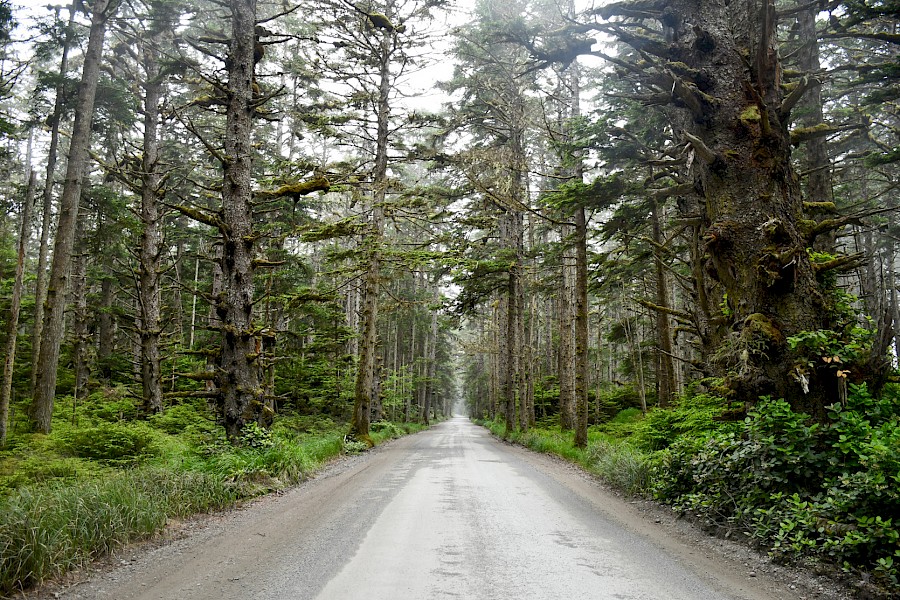 The land and shores visited by the BC Parks iNaturalist Project field crew during this trip are in the territory of the Haida Nation. The author and field crew are grateful to the Haida for allowing us to visit and conduct this work in their beautiful home.

We would also like to thank the employees of BC Parks, the BC Conservation Data Centre and the Council of the Haida Nation who assisted us with their valuable insight, advice and time during our time on Haida Gwaii.

[1] Ecological Reserves are set aside to conserve representative and special natural ecosystems, plant and animal species, features and phenomena. They have a high level of protection and allow for scientific research and educational activities. Learn more about ecological reserves.

[2] Citizen science is the participation of the public in scientific research through collecting and sharing data with scientific projects and initiatives such as monitoring programs.