October 27, 2022
by BC Parks Foundation in Protecting Parks 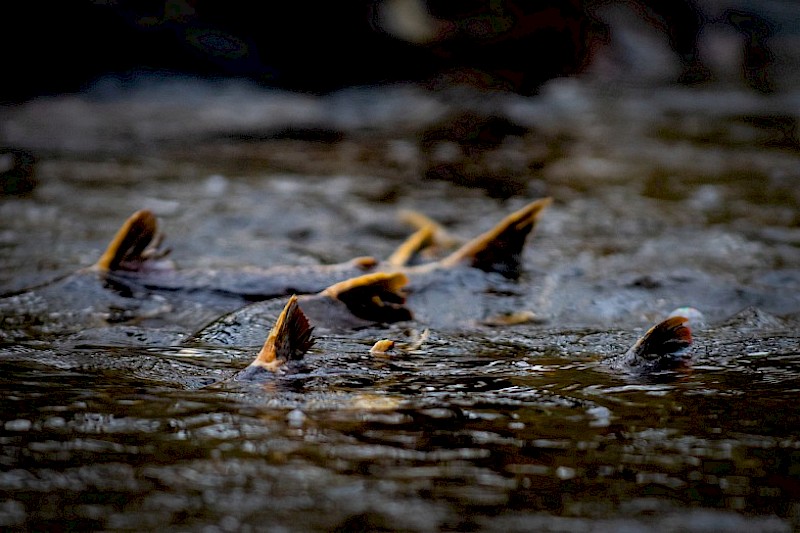 Our family moved to the Comox Valley in 1994, and began exploring the creek that flows a block from our home. While peering into the stream, our daughter Carly asked “What’s that!?” Swimming along was a small, gray ribbon of a fish. Surprised, we investigated, and we learned that lamprey are a natural part of the ecosystem on the west coast.  And this lamprey was likely the  Morrison Creek Lamprey, a sub-species with a unique life history that lives nowhere else in the world except in our neighbourhood creek, Morrison Creek.

Thus began a lifelong fascination with the Morrison Creek watershed. Our family signed up for Streamkeeper courses, and soon we were volunteering, together with many other locals. Together we learned about salmon life cycles and habitat, and gained experience with stream monitoring, stream restoration projects and community engagement. Twenty five years later we are still active volunteers with the Morrison Creek Streamkeepers.

In the late 1990s the Inland Island Highway was being planned, and proposed routes ran through the myriad tributaries and wetlands of Morrison Creek headwaters, an area of privately owned and managed forest land. With vociferous input from the community, a better route was chosen that has had less impact on the headwaters. In conjunction with highway construction, a stream restoration project was undertaken in First Supply Creek, a tributary of Morrison Creek.  It was then that we were introduced to the Morrison headwaters, which we also came to call “Beaver Venice” for its amazing network of wetlands with new and aged dams built by generations of beavers.

One summer we went on a bike ride on an old logging road that took us to the gravel escarpment on the western edge of the watershed. We marvelled at water appearing like magic out of the gravel, and we learned that this unique geological formation was a gift left behind by the glaciers. The glaciated landscape is what created the many year-round springs and seeps that fill the tributaries, beaver ponds and swamps that fill Morrison Creek. This cool-year round flow sustains the whole creek, right down to the pool where Morrison Creek enters the Puntledge River.

"We call this pool a "salmon spa" as its oxygenated waters provide a holding place for pinks, chinook, chum and coho. Many of these fish will complete their life-giving cyce in Morrison Creek."

The Morrison headwaters are not pristine; the primal forest was logged in the 1920s and then again in the following decades. It is a juvenile landscape on its way to finding itself, with scattered old trees helping it find its way.  Nobs of dry fir forest descend into dark cedar glades; riotous swampy edges of grasses, ferns, salal and Devil’s Club mix in a botanical frat party. We see, hear and smell much: warblers’ song in the alder stands, swallows’ fluid flight over ponds, a cougar kill buried in leaves, grassy bear scat, elk scat and hoof print, the buzz of dragonflies, pine saps under cottonwood, bog orchids with pond lilies, an otter family diving awaiting a meal of salmon, and more, from slime mould to screeching Red Tail Hawk.

The Morrison Creek Headwaters is small enough to purchase, large enough to be meaningful, near enough to be accessible, wild enough to seem remote, and threaded with life-giving water. A place to walk and wonder. Please donate to protect this enclave forever.

To protect this phenomenal natural area, in partnership with the Comox Valley Land Trust, we have negotiated an agreement to purchase all 715-acres from the logging company. Together, we have raised most of the funds required. We have the opportunity to act now to complete the purchase and close the deal before the clock runs out.

Jan Gemmell is the current President of Morrison Creek Streamkeepers. She and her family have been interested in and involved with Morrison Creek since moving to Courtenay in 1994. A childhood summers spent on the marshy shore of Lake Winnipeg, wilderness canoe trips with her uncle, float house living, oyster farming, stream keeping and kayaking, water and the life it holds have been flowing through Jan’s life. She has a certificate in Landscape Horticulture from Capilano College and is mighty keen on plants.