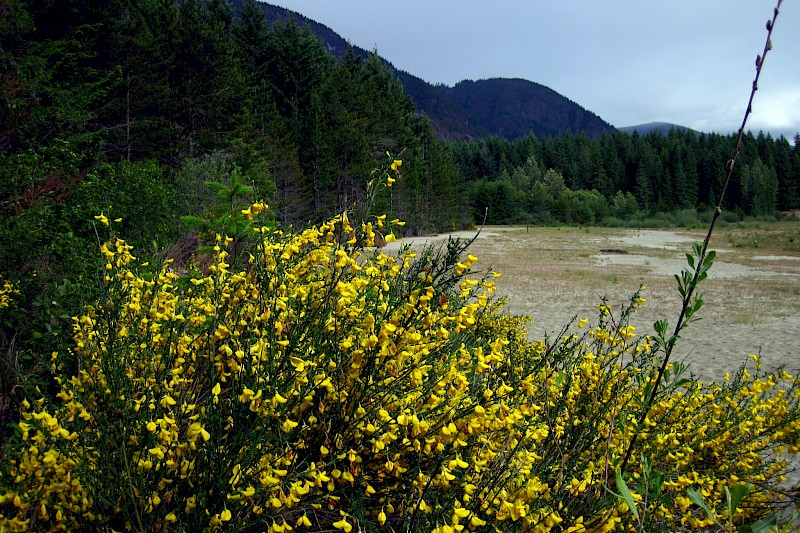 What are invasive species?

Invasive species are plants, animals, fungi, or other organisms that are not native to a region, are damaging to native species, habitats, and ecosystems, and can quickly become established and spread into new areas. These species may be introduced either intentionally, such as an ornamental flower purposefully planted for its beauty, or unintentionally, such as a crab or jellyfish hitching a ride across oceans in ship ballast water that is then discharged.

One of the most infamous (and, frankly, strangest) examples of an invasive species introduction to North America is the European Starling. This robin-sized bird’s iridescent black plumage dotted with white spots is a familiar sight to most people across North America thanks to one man’s affinity for both Shakespeare and birds. Wishing to introduce every bird mentioned in Shakespeare’s collective works to North America, in the late 1800’s, this Shakespeare fan released at most 100 starlings (estimates vary) into New York City’s Central Park. Just over a century later North America’s starling population is over 200 million and extends across the continent, with negative impacts on native bird populations. 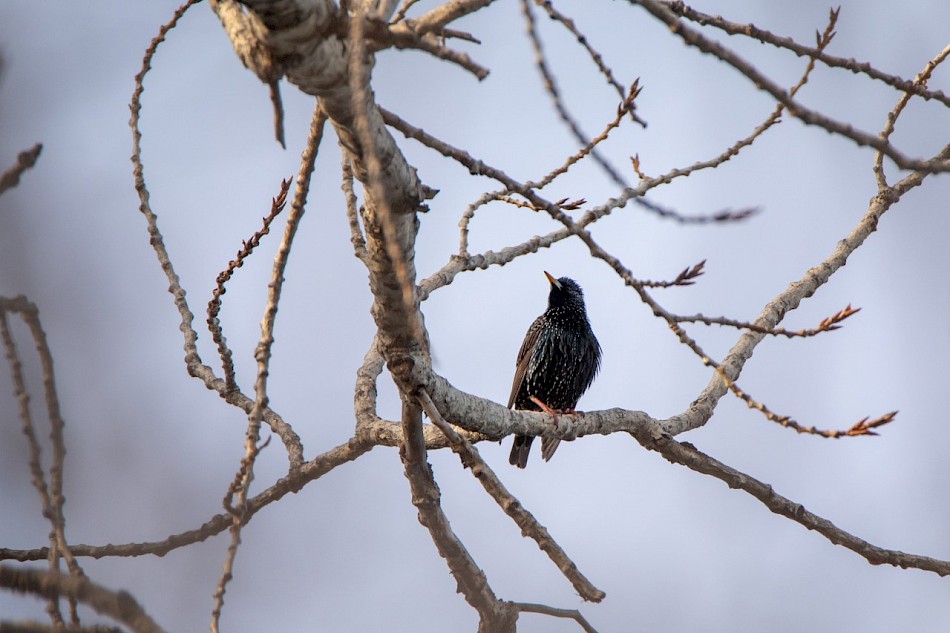 What’s in a name?

You may have come across the terms alien, non-native, exotic and introduced, likely used interchangeably with invasive to describe the same concept or even the same plant or animal. However, there are a couple of key differences in these names.

Alien, non-native, exotic and introduced species have been introduced somewhere they are not found naturally, but they don’t necessarily spread any further or have negative impacts. Invasive species on the other hand are, as their name implies, invaders. They establish themselves in a new place, spread beyond their initial point of introduction, and cause destruction in some way. They can have negative impacts on the environment, human health or economy in the places they invade. The seriousness of these impacts can range from minor and localized to severe and disruptive to an entire ecosystem. Common carp, for example, stir up sediments and damage aquatic plants when they feed, and can ultimately degrade or destroy wetland habitats and make them less hospitable to native fish and invertebrates.

Most invasive species are non-native: when taken outside its native environment, a plant or animal is usually freed from the predators and pathogens which keep its population in check. Occasionally native species can become invasive, but this tends to occur when human actions or natural events like fires or landslides disturb an area, allowing an ambitious native species to gain a better foothold.

While invasive species often flourish in and around areas that have been disturbed or modified, such as roads, agricultural lands and human settlements, some are making their way into lands designated for the preservation of native species and ecosystems — including B.C.’s parks and protected areas. Invasive plants and animals can have a number of negative impacts on these conservation lands, including competing with native species for space and food, preying on animals and grazing on plants, and altering habitat. Here are just a handful of the introduced invasive plants and animals you might come across when out exploring parks.

If you spot any of these be sure to take photos and submit them to iNaturalist; your citizen science observations can help alert biologists and managers of new invaders before they get a foothold! See the Ministry of Environment’s list of Priority Invasive Species for information on these and other plants and animals to watch out for. 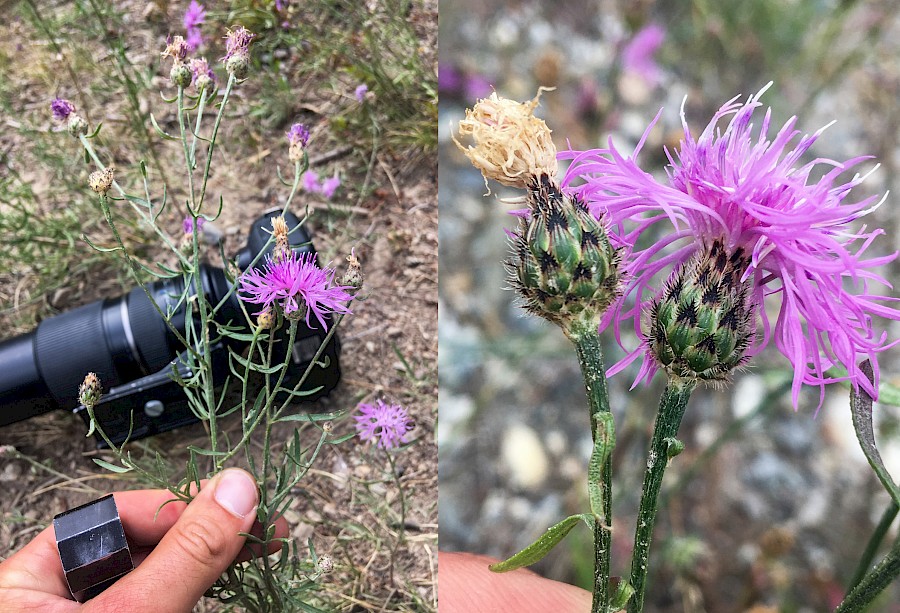 Spotted knapweed’s pretty pinkish-purple flower may be visually appealing, but this plant can damage plant communities by out-competing native species for space and resources. It most commonly takes hold in disturbed areas in grasslands and dry forests across the province, but it can also invade less disturbed habitats nearby. It spreads by its bristly seeds, which can hitchhike on plant legs or the undersides of cars. Keep an eye out for the flowers and be careful to not accidentally take parts of the plant with you if you walk or drive through an area in bloom. 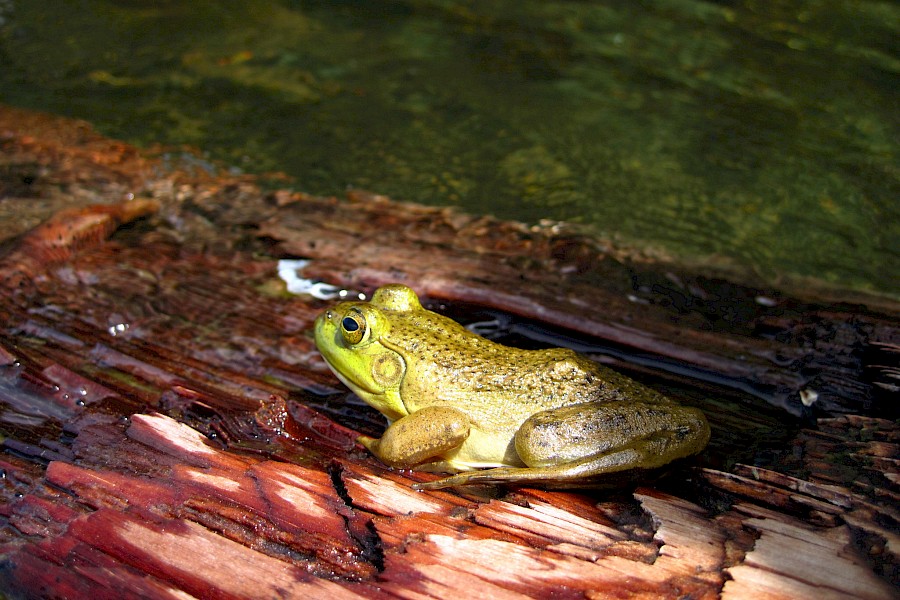 This formidable frog’s presence in B.C. can be blamed on escapees from a failed attempt to farm the species for its edible legs. It has since spread across much of the south coast and Vancouver Island. The bullfrog can be easily identified by its large size — up to 20 cm long — and a distinct circular “ear” (tympanum) just behind each eye. It outcompetes native frogs for food, including the charismatic Pacific chorus frog and the northern red-legged frog, considered a species at risk both in B.C. and nationally. As a large and voracious predator, it also eats other small animals like snails, songbirds, salamanders, snakes, small mammals, and even other frogs. 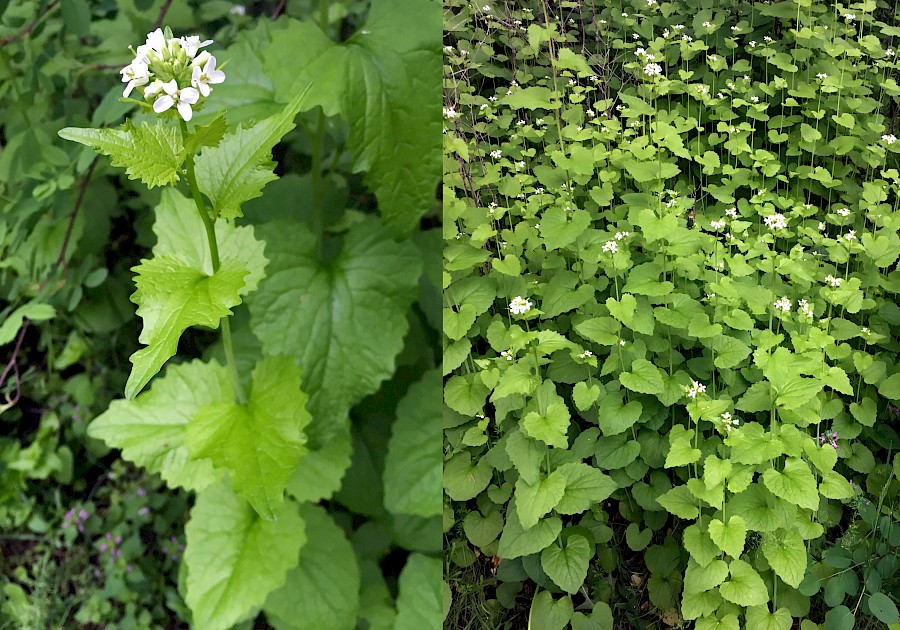 This unassuming plant can be distinguished by its heart-shaped leaves that smell distinctly of garlic when crushed, and the small white flowers clustered atop the stem. It can take over the understory of forests as well as more open habitats, pushing out native plants — including species at risk — and becoming the dominant vegetation. It has a perfect storm of traits that make it an ideal invader: it can self-fertilize, one single plant can produce up to 8,000 long-lasting seeds that can easily hitch a ride on people, animals and vehicles, and it’s not palatable to deer. 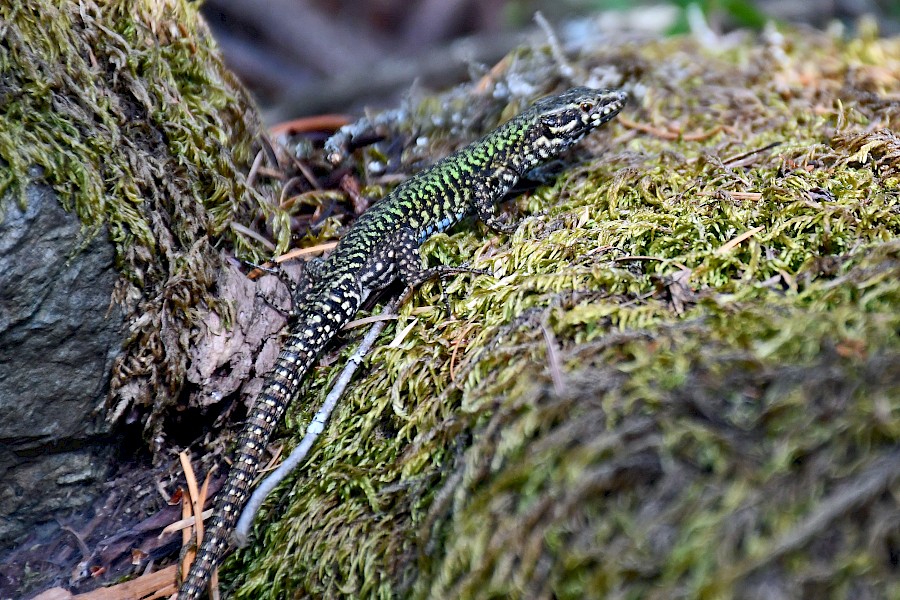 This lizard’s presence in B.C. can be traced to its release in the 1970’s from a small zoo on southern Vancouver Island. Since then it has become firmly established in the south part of the island, and a few reports have emerged from the South Coast and the Okanagan. While the species’ impact on ecosystems isn’t yet clear, it can form dense populations in the right conditions and might compete with the native northwestern alligator lizard for habitat and food. The relative newness of this invasion means citizen science reports of sightings can be very helpful in tracking the European wall lizard’s spread in the province. 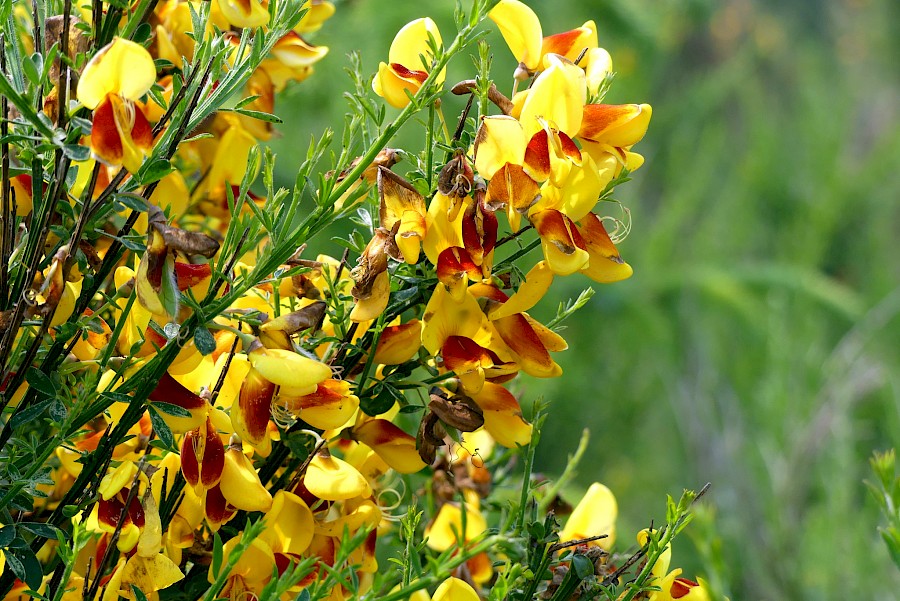 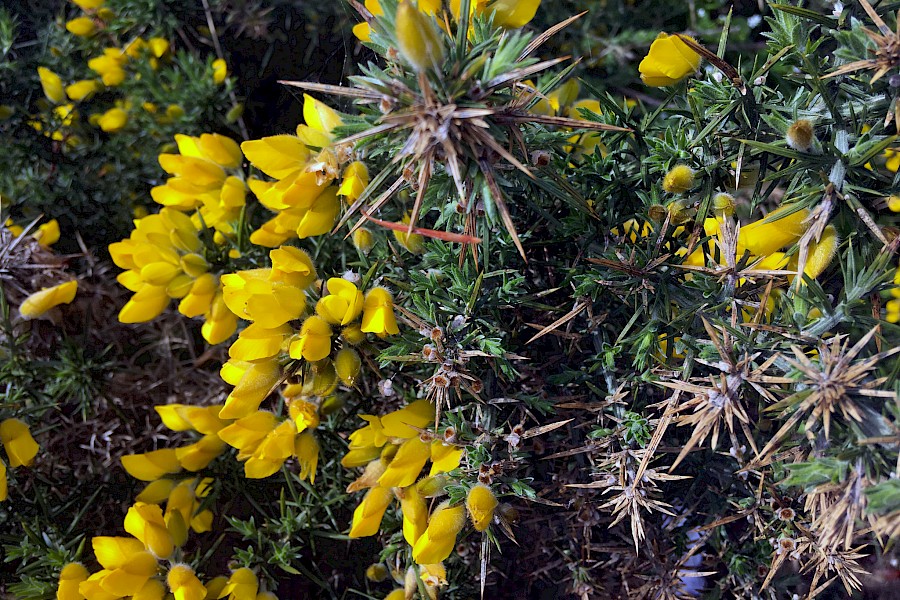 These two lookalike shrubs can form dense thickets along coastal bluffs, roadsides, and other open and disturbed habitats in southern and coastal B.C. Their bright and cheery yellow pea-like flowers made them appealing ornamental plants when they were initially introduced to Vancouver Island (broom) and Oregon (gorse). However, their success at invading open spaces has turned them into an ecological foe: their dense growth prevents native plants from flourishing, causing concern for species in endangered Garry Oak meadows and for forest regeneration in logged sites. 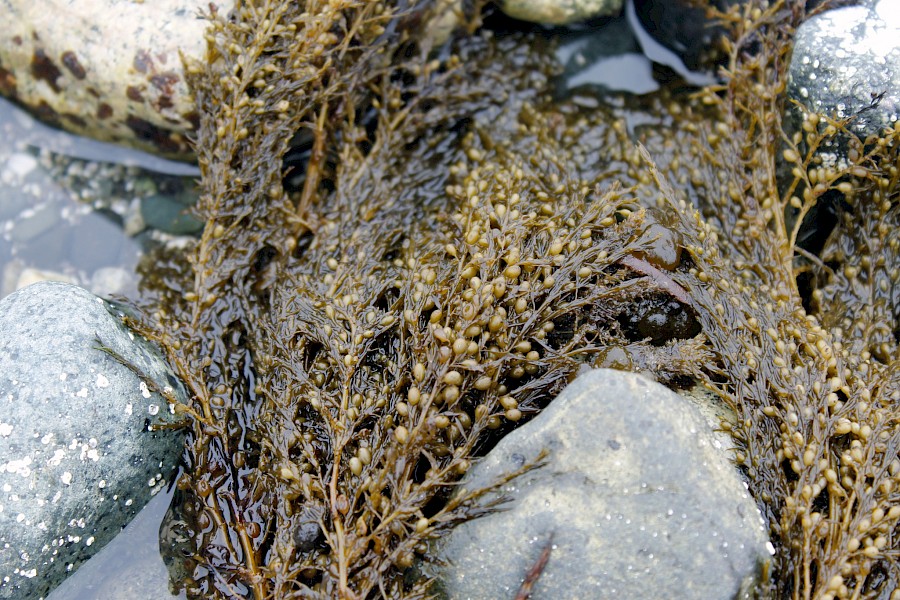 Photo: Japanese wireweed in the intertidal of Kunxalas Conservancy by Lena Dietz Chiasson

Unlike broom and gorse this perennial seaweed is thought to have arrived in B.C. by accident, as a hitchhiker in a shipment of Japanese oysters. Like its land-based invasive counterparts, it takes over habitat from native seaweeds and seagrasses, displacing them and reducing the valuable habitat those native species create for marine fauna. 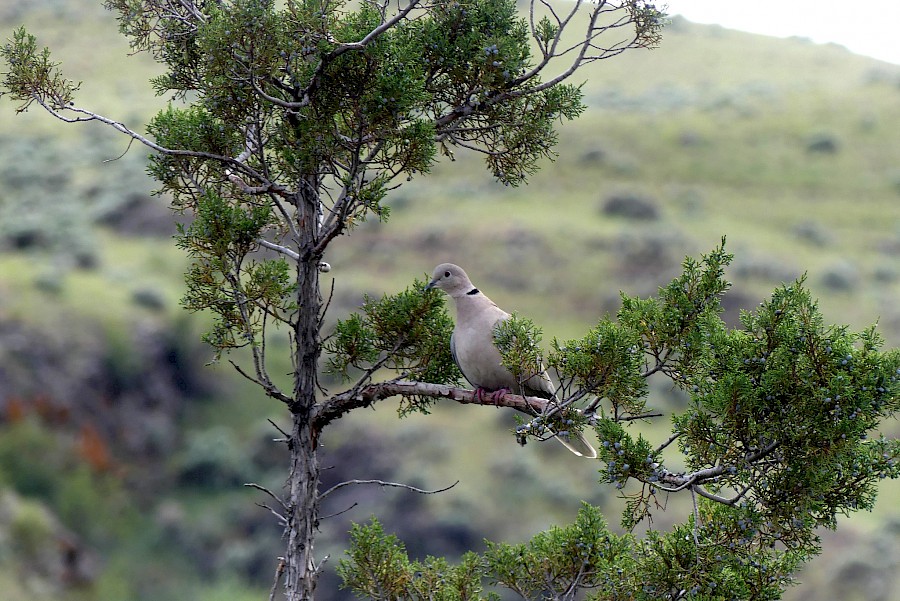 Much like the European starling, the Eurasian collared-dove made its way across much of North America in a relatively short period of time. Starting from just a handful of birds introduced to the Bahamas (this time accidentally) in the 1970’s, it is now found in most provinces and territories in Canada. Citizen science records have been valuable in recording the relatively recent northward spread of this bird. Its interactions with native species are not yet well known, but a few studies suggest it could compete for food with the native mourning dove, and potentially contribute to the spread of parasites, viruses, and infections to native populations. 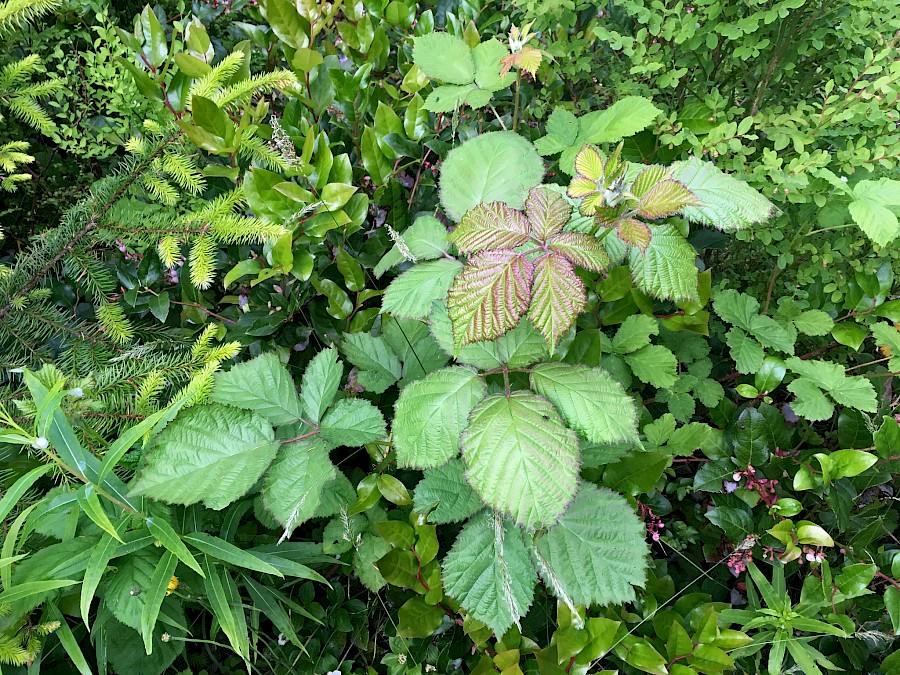 Tasty blackberries may make for a wonderful trailside snack while out hiking in parks, but as with gorse and broom the robust growth of Himalayan blackberry (also known as Armenian blackberry) can have serious negative consequences for low-lying native plants and tree seedlings. It can form wall-like thickets that block the establishment of native plants, limit animal movement, and make erosion and flooding more likely by out-competing native shrubs with deeper roots that help stabilize stream banks.

Catch these and other invaders in the act: take photos of invasives and other species and share them on  iNaturalist.org or the free iNaturalist app. You’ll get to show off your shots, get identification help and document biodiversity with the  BC Parks iNaturalist Project. You can also join the project to share your ID expertise!

Download our How-To Guide to learn more and get started. Tag your observations with #iNatBCParks and @bcparksfdn on Instagram and Twitter to have your photos featured in our newsletter and social media channels.

BC's parks are our pride and joy, naturally.