Last year during course selection, I took a chance on a BC environmental history course (and it was fantastic!). In the course we learned a lot about the history of British Columbia’s park system, including Strathcona Park. Before the course, I didn’t know that Strathcona is BC’s oldest provincial park. Nor did I know that the park was a hotbed for early environmentalism in BC. The park has a history as rich as the lakes, rivers, mountains, and forests it conserves. I’ve spent time in the park in the winter, ski-touring and snowshoeing on Forbidden Plateau, and in the summer hiking and exploring the alpine. In both seasons, it is an incredible destination, providing opportunities for a variety of outdoor recreation activities. Strathcona also has wide range of terrain and accessibility. There is opportunity to enjoy anything from the wheelchair-accessible boardwalks in Paradise Meadows to climbing the numerous peaks situated in the park. Regardless of your outdoor experience, Strathcona has something for everyone. Read below about a trip I did in Strathcona Park up King’s Peak.

Before this trip, I’d only ever seen Strathcona Park in the winter. I’d enjoyed the park’s amazing mountains and forests on snowshoes and skis, but had never seen the park beneath the layer of snow. I was in for a treat! Kings Peak was an awesome introduction to backpacking in the park and a fantastic introduction to Strathcona summers (albeit still with quite a bit of snow!). The views from the top were stellar; a wonderful panorama of island peaks, Elkhorn, Colonel Foster, and Rambler, to name a few. I went with a friend and we decided to do the trip over three days, taking our time to enjoy the hike and explore the area. Camping in the meadow below the Ramparts was lovely and we were treated to great weather until our last day when relentless rain chased us all the way down to the parking lot and back to Victoria.

A great introduction to Vancouver Island’s alpine terrain, Kings Peak is a gem in the Strathcona Park backcountry. The hike can be attempted as a strenuous day trip or completed over multiple days, offering hikers incredible views and a taste of what the Island alpine has to offer. The trail starts fairly moderate out of the parking lot. Once past the Kings Peak Trail sign, the terrain quickly becomes steeply inclined with a series of well-maintained switchbacks and steps.  Take a breather at the waterfall about 90min into the hike. From here, continue up the well-trodden trail, crossing a couple of streams and passing by a couple of waterfalls. Look out for cairns and flagging along the way. After about 2 hours you will reach a wide bowl and meadow, which makes a great camping spot for a multi-day journey. From here, follow the non-technical Hiker’s Route up towards the peak. Continue up a prominent gully and gain the ridge up to the Ramparts. Enjoy the 360 degree views and look out for cairns leading you up Queen’s Ridge. Once you reach the col between Queen’s Ridge and Kings Peak, continue along the trail, following cairns to the summit block. Sign the summit register and take in the awesome mountain views featuring prominent island peaks, Elkhorn Mountain, Mt. Colonel Foster, and Rambler Peak.

Please note that while the trail is well-marked and relatively easy to follow, getting off route can lead you into more technical terrain. Ensure that you inform yourself of the weather and current trail conditions before heading out on your adventure, snow cover can make route finding much more difficult. The pictures included in this post were taken in late June when there was still significant snow cover on the trail. We took a slightly different route than the Hiker’s Route and carried ice axes and crampons for steep snow sections.

This area of the park, while quite popular, is not very developed. The road access into the trailhead is obvious off the highway but the road is quite rough and pot-holed. We were driving an AWD car and we were fine. Other cars in the parking area were 2WD. There are no pit-toilets at the trailhead or anywhere along the trail, so you must ensure that you are dealing with your waste in an appropriate manner (Leave No Trace!). There is little parks signage in this area, the trail is mostly marked by flagging and cairns. It would be reassuring to have some official signage along the trail. There is little in the way of interpretative signage either. There is a sign at the trailhead about one of the endangered birds in the area. It looked like there were previously some info cards for people to take, but no longer. It would be nice to have more information about this at the trailhead.

Heading up Kings Peak? Remember to: 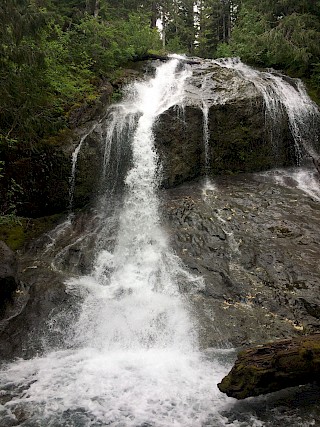 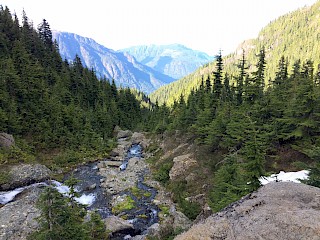 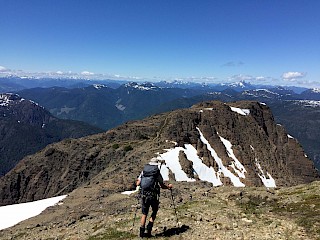