December 17, 2019
by BC Parks Foundation in Protecting Parks , Wildlife Forever 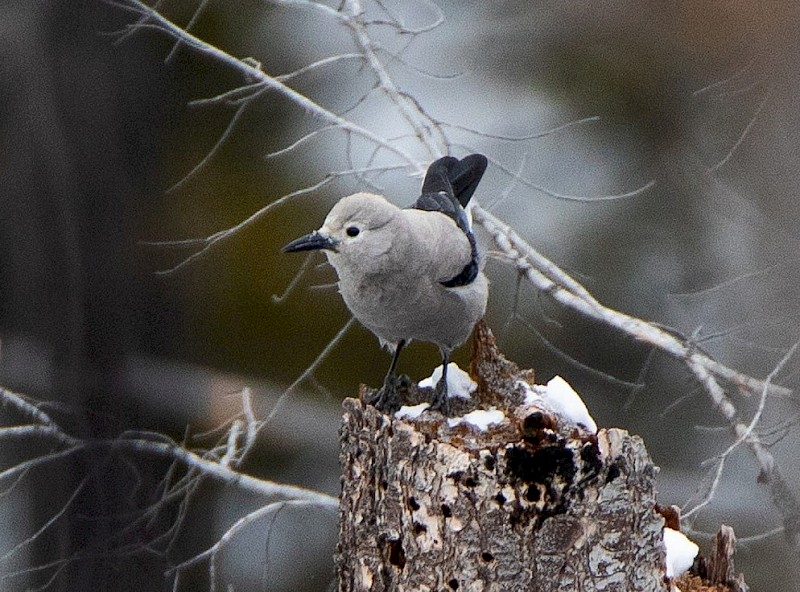 Come December, much of our province is under snow or hunkering down during windstorms, and a bit of festive flair helps to brighten the cold and dark winter months. To celebrate the bounty of B.C.’s biodiversity, we’ve gathered up some of our province’s more merry and bright species, as photographed by contributors to the BC Parks iNaturalist Project. Their connections to classic Western holiday traditions may surprise you! 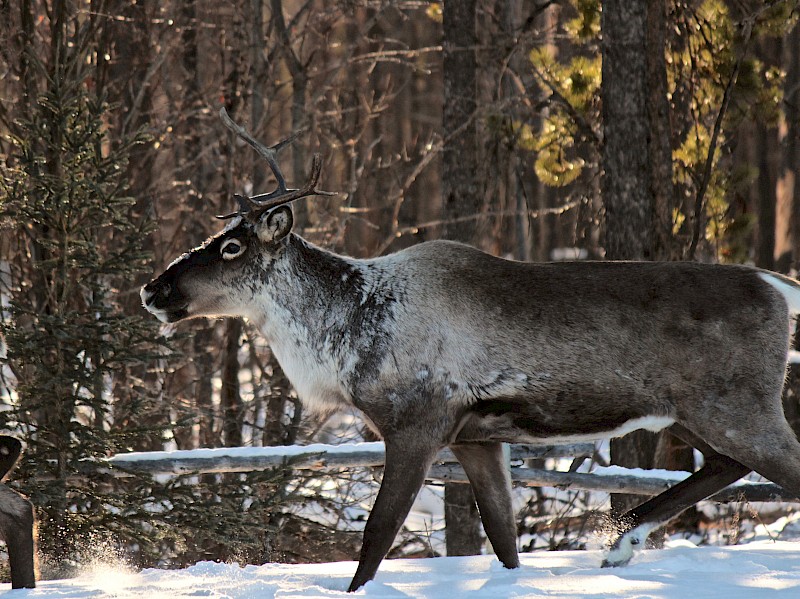 Better known in North America as caribou, this majestic animal is unique among deer species in that both males and females develop antlers, instead of only the males growing antlers like in other species. B.C.’s caribou all belong to the woodland subspecies; they live in the mountains and boreal forests of northern and eastern B.C. Learn more about B.C.’s “reindeer.” 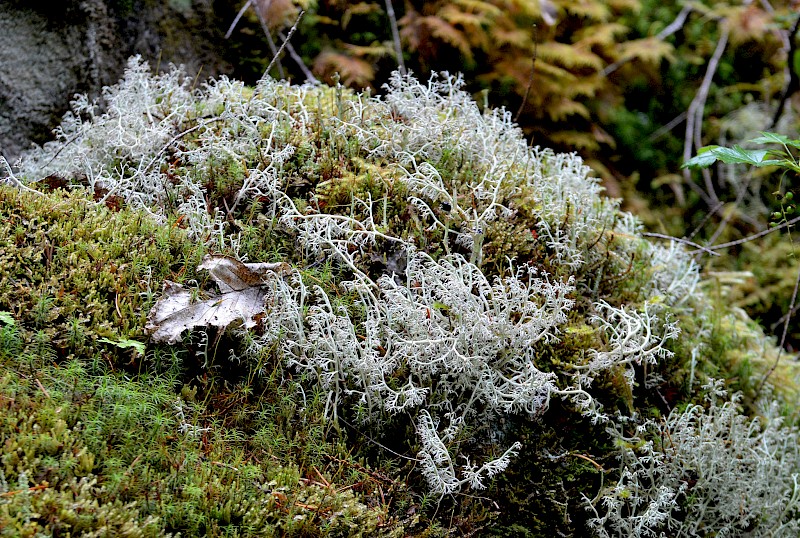 Reindeer lichen gets both its common name and its scientific name (rangiferina) from the caribou (reindeer) that graze on it. With a tendency to form carpets over open habitats, this cold-hardy, slow-growing lichen also looks like a frosty dusting of snow. A number of similar-looking lichen species also have the “reindeer” common name, but this one is a caribou favourite. 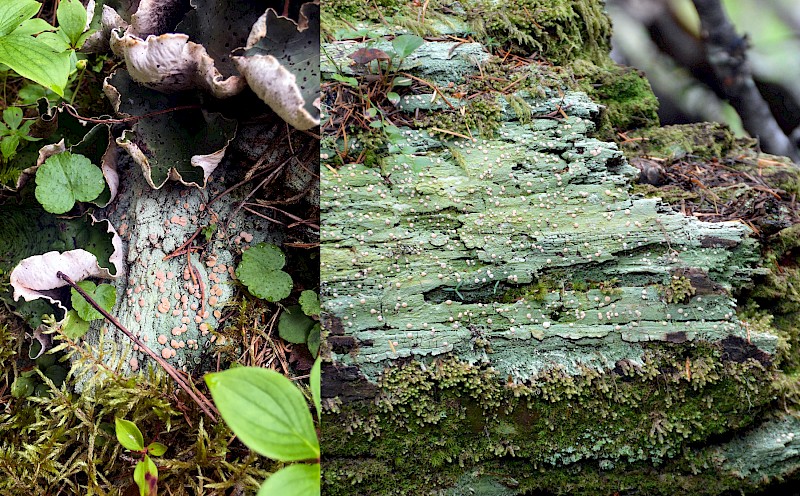 With its pastel peppermint palette dotted with delicate pink gumdrops (actually spore-producing fruiting bodies), stumps and logs encrusted by this lichen look like they’ve been paid a visit by the sugar plum fairy. Its other common name, fairy barf lichen, is not quite as delectable. 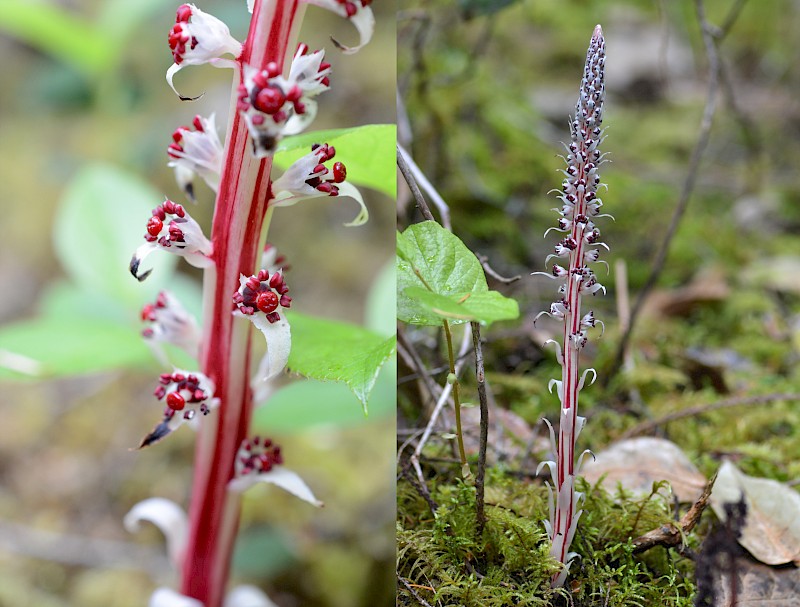 Is it an oddly ornate candy cane that’s been straightened and shoved in the ground, or a whimsical-looking parasitic plant that survives by hacking a symbiotic relationship between a fungus and a tree? While both seem unlikely, this non-photosynthetic plant does indeed get its energy and nutrients from a fungus (the American matsutake), which in turn has a mutually-beneficial connection with a conifer tree. 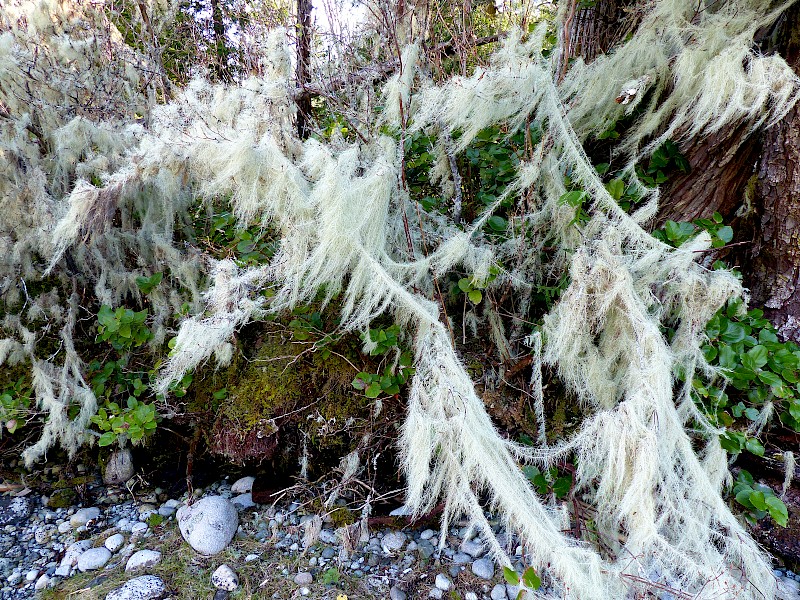 This lichen’s festive tinsel-like appearance as it drapes and hangs from old-growth conifer trees is no coincidence: it may have been the original Christmas tree tinsel! Growing in single strands and reaching several metres long, it was perfect for wrapping around festive, decorative trees. This species is extremely sensitive to air pollution and has been disappearing globally; however, the Pacific Northwest is one of its remaining strongholds. 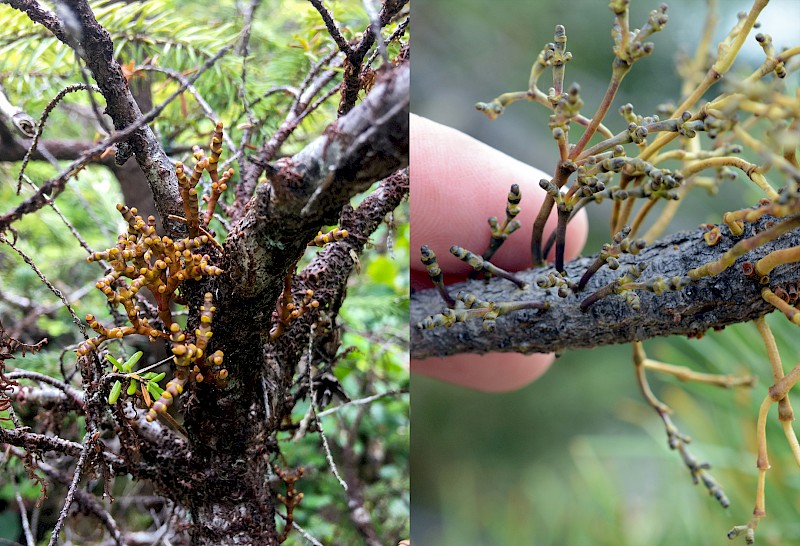 There are hundreds of species of mistletoe found worldwide, which collectively have a convoluted trail of myths and traditions variously linked with solstice, Christmas, peace, love, fertility and marriage. However, as a scraggly parasitic plant that can stunt the growth of its host tree and with poisonous berries that can harm unsuspecting snackers, mistletoe is an unlikely symbol of holiday romance. The species pictured here are two of four dwarf mistletoes found in B.C. 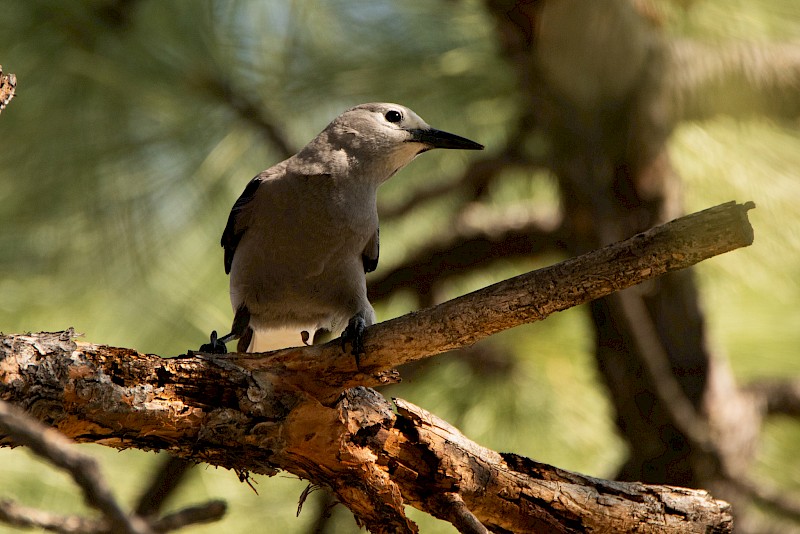 Much like the classic wooden nutcracker, this jay-sized bird is inextricably linked with the nuts (pine seeds) for which it is named. Some pine tree species (such as whitebark and limber pines) rely on nutcrackers to crack open their pine cones and disperse their seeds, and over time this relationship has changed the shape of the seeds, cones and even the trees themselves. Clark’s nutcrackers test seeds by opening and closing their bills (“bill-clicking”), kind of like their wooden namesake’s nut-cracking bite. 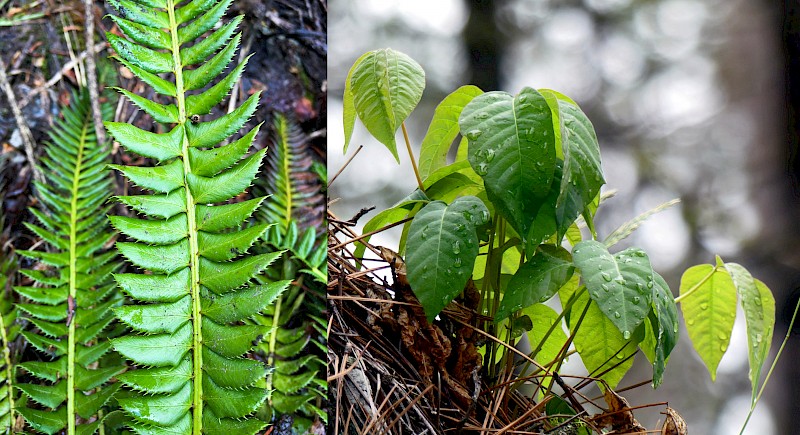 This classic Christmas carol celebrates two plants that are both invasive and introduced in B.C. — fortunately, northern holly fern and western poison ivy are great native flora alternatives. However, best stick to the traditional two for your festive holiday décor. While northern holly fern stays richly evergreen year-round, you’d have to head to the hills (alpine and subalpine elevations) to find it; and true to its name, western poison ivy can cause a number of dermatological woes if touched. 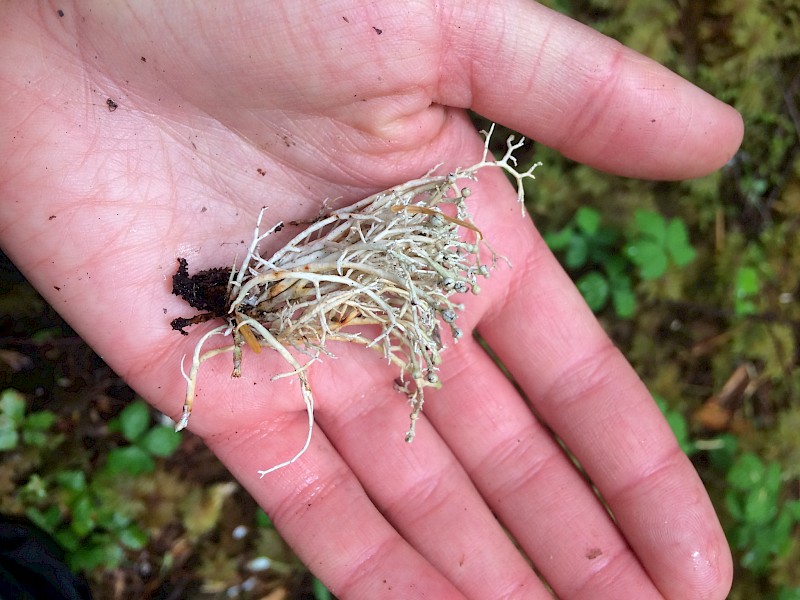 What is this? A Christmas tree for ants? Like a miniscule frosted Christmas tree — or more accurately, Christmas shrub — this lichen has teeny-tiny “ornaments” (spherical spore-producing fruiting bodies) hanging from the tips of its branches. Find this tiny “tree” growing on the trunks and branches of conifer trees. 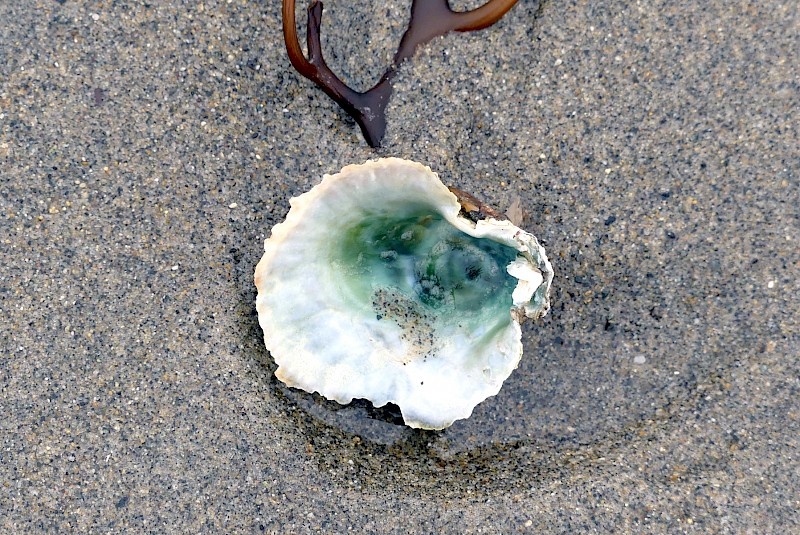 This marine bivalve keeps a low profile in life, attaching to rocks and docks through a hole in the flattened bottom half of its shell and creatures. This species’ iridescent white and green shells catch the eye when they wash ashore, however; not only are they beautiful, but they make a magical tinkling sound when clinked together (jingle shells, jingle shells, jingle all the way!). 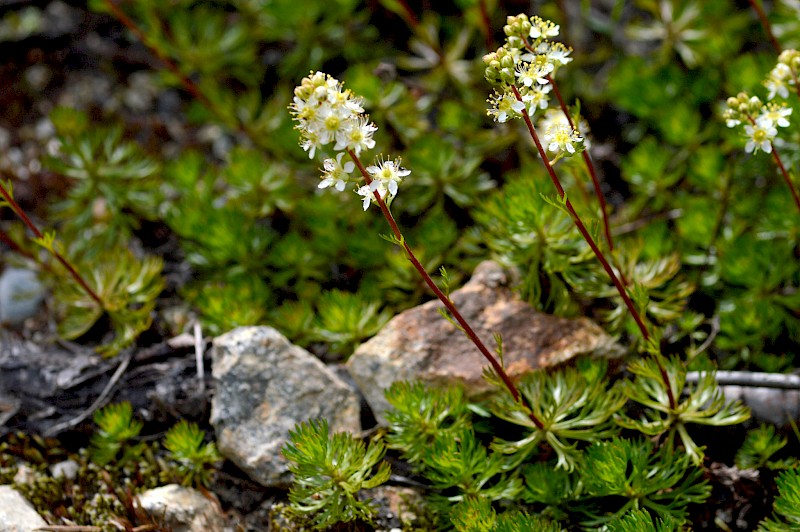 Named for the finely-divided leaves that look like partridge tracks, partidgefoot’s pom-pom-like evergreen leaf tufts wouldn’t look out of place in the jolly holiday trimmings of Whoville. In summertime, this common alpine plant is topped with dense snowy white flower clusters. 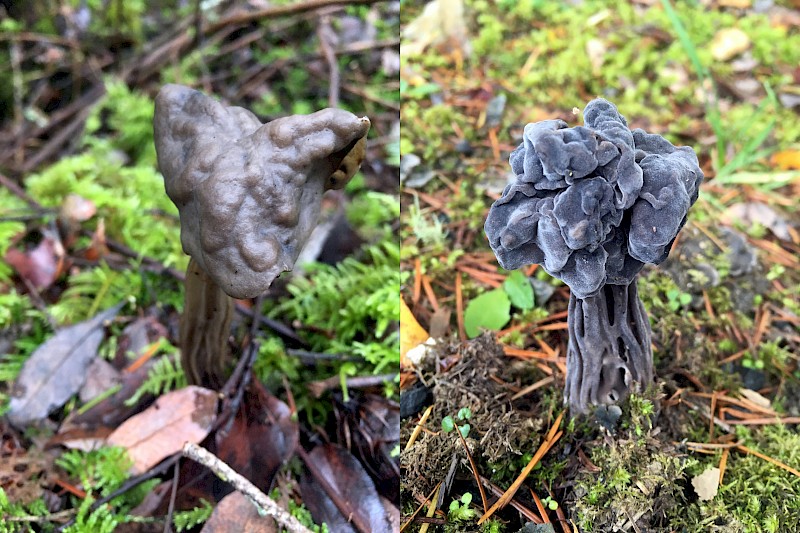 Some species of this mushroom look exactly like tiny elf-sized saddles; others a bit less so. Regardless, the whimsical appearance of Helvella mushrooms gives the impression they were purposefully placed in the ground by a mischievous, magical, holiday elf. 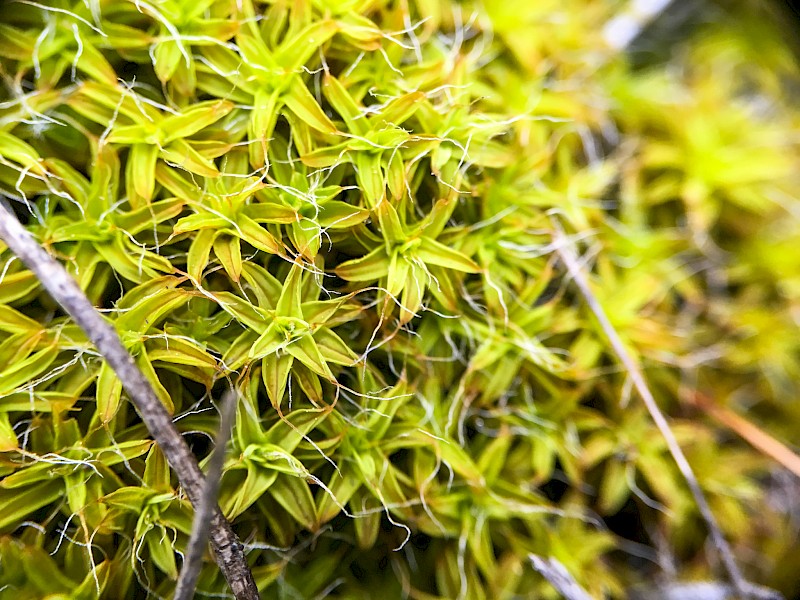 You don’t have to wait until a clear dark night to be dazzled by this traditional holiday symbol: when out on a hike, pay attention to the tiny plants around around your feet and you just might spot cushions of this tiny star moss spangling the ground.

Do you have a favourite festive find?

Take photos of your floral, faunal and fungal friends and share them on iNaturalist.org or the free iNaturalist app. You’ll get to show off your shots, get identification help and document biodiversity with the BC Parks iNaturalist Project. You can also join the project to share your ID expertise!

Download our How-To Guide to learn more and get started and tag your observations with #iNatBCParks and @bcparksfdn on Instagram and Twitter to have your photos featured in our newsletter and social media channels.